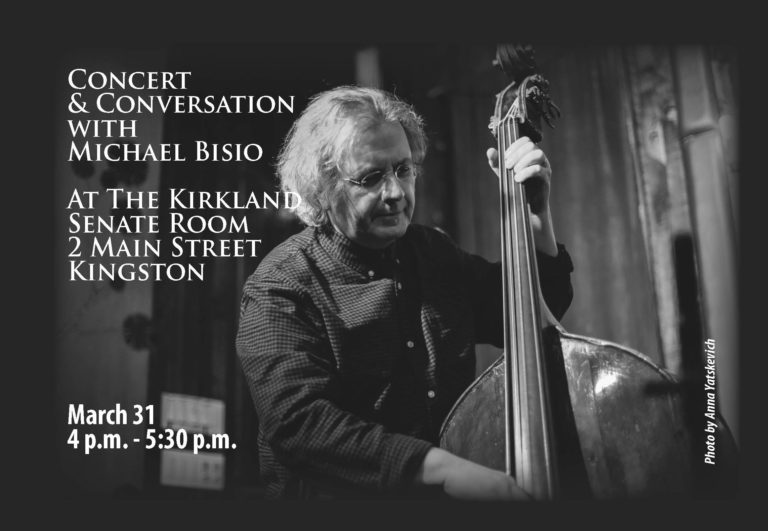 Suggested donation is $10 at the door. Admission covers the event and light snacks and nonalcoholic beverages and; a cash bar features Newburgh Brewing Company Cream ale and wine. Bisio’s CD, Travel Music, is available for purchase at $20. This event is open to the public with limited seating. Parking is available on-street or in the County municipal lot on Main Street.

Bisio has over 100 recordings in his discography, 24 of these are split evenly between leader/co-leader, 10 document his extraordinary association with modern piano icon Matthew Shipp. Michael has been called a poet, a wonder, and one of the most virtuosic and imaginative performers on the double bass. Nate Chinen in the New York Times writes : “The physicality of Mr. Bisio’s bass playing puts him in touch with numerous predecessors in the avant-garde, but his expressive touch is distinctive;…” As a composer Michael has been awarded nine grants and an Artist Trust Fellowship. With over one hundred works of various forms and lengths, Michael has composed music for all the ensembles under his leadership and many of his associates. These pieces have been performed in clubs, concert venues, and festivals. They have been broadcast over assorted media. Most have been recorded, some were composed for films and theater, one found its way to animation. For more about Michael Bisio, visit www.michaelbisio.com.

ABOUT THE EMERGENCY ASSISTANCE FUND: RUPCO’s Emergency Assistance Fund, partially funded with support from United Way of Ulster County and Bruderhof Communities, routinely exhausts its funding by midyear. This fundraising event will help local families in jeopardy of losing their homes a safety next to bridge a financial gap that might otherwise leave them without heat, evicted or homeless. In 2019, through its Program Services Department, RUPCO distributed over $43,000 to Ulster County families in need. On average, RUPCO receives 10-15 requests each week for assistance with back-rent, security deposits, and move-in expenses to help people move out of emergency housing sites into permanent housing. For more information or to donate, visit www.RUPCO.org/support-us

ABOUT THE LACE MILL:  In 2015, RUPCO renovated The Lace Mill, a century-old lace curtain manufacturing facility, which is now home to over 100 people in 55 apartments preferenced for artists.  RUPCO work here — Creative Placemaking — establishes a place for the arts to grow and flourish, followed quickly by the surrounding community. The Lace Mill is an integral part in Kingston’s ongoing urban revitalization, located within the City of Kingston’s Midtown Arts District. The Lace Mill Arts Council hosts numerous art shows and performances each month in over 8,000 square feet of gallery space in its East, West and Main Galleries. These shows are free, open to the public, and often include meet-the-artist receptions and community-inspired collaborations. For more information, visit www.thelacemill.com.