“Life happens while you are busy making other plans” ~ John Lennon 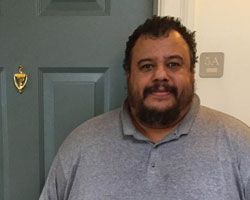 For Gabriel Delgado — a RUPCO resident at the Stuyvesant in Kingston — his life plan was homeownership. “I really did want to own my own house,” Gabriel says, “but unfortunately that didn’t happen.” Instead of working to fulfill his aspirations, Gabriel was struggling just to make ends meet. “I was really having a difficult time because my income was very minimal with my jobs” he recalls, “I almost couldn’t go without falling behind on rent and my other bills.”

For three years, Gabriel looked into receiving low-income housing in Ulster County but every time he applied, he was denied. Finally, working as a cab driver and living in a single room, Gabriel decided to give RUPCO a shot. He walked in and immediately got an application and was, to his astonishment, accepted. Gabriel feels that his acceptance is nothing short of “a miracle” because in truth, he never expected his name to make it on the list.

It’s been nine years since Gabriel moved into his fifth floor apartment and he still feels an overwhelming sense of relief. “From where I was, to where I am now? I feel like I can relax a little easier. I have a more spacious place and I’m comfortable here. I have a place to land; before I was always jumping around from room to room.” Not only does Gabriel no longer have to worry about whether he has to choose between feeding himself or paying the bills, he is also able to explore his interests. Gabriel enjoys his Friday nights by participating in his local church band as a drummer, something he may not have been able to do if he still had the weight of expensive bills and a low-paying job on his shoulders.

RUPCO has opened many other doors for Gabriel. One benefit of being a RUPCO resident is the free programs that they offer. Gabriel says the programs he’s attended are, “really healthy and really constructive programs where anyone can participate.” As someone who struggles with his health, Gabriel is “grateful for the loads of tips on better health and better living.” RUPCO’s Program Services Supervisor, Kim Mapes, helped to connect Gabriel to valuable services, assistance, and wellness care. Every year Gabe receives a Thanksgiving meal delivery from King’s Fire Church, Lake Katrine. He also has fresh vegetables delivered each month to his front door.

Gabriel has not only settled in his new home, he thrives in it. “Having a home to go to matters because you feel like you’re at a place where you can just relax, and it’s familiar to you; you feel safe.”