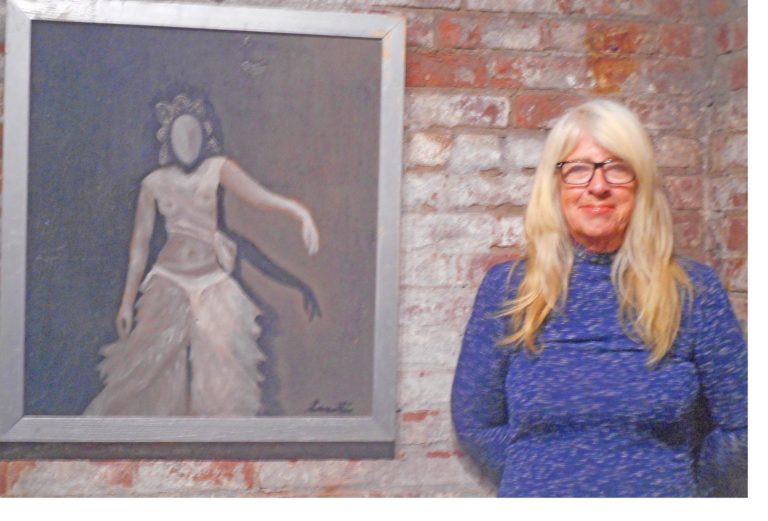 Standing outside The Lace Mill, wearing over-sized black sunglasses, talking to a neighbor, Lanette Hughes appears nondescript. A cordial, “Hi, how are you?” to a stranger, she resumes her conversation. You would never guess she churned her tragedy into art in a profound way. A first-hand experience with domestic violence, her identity stolen and her savings robbed from her, these life-lesson setbacks made her willpower stronger. Lanette Hughes is not only a survivor, but a thriver — and her artwork embodies her understated vigor.

Hughe’s parents introduced her to situations at an early age that called for toughening up. They lived in Europe withinin target sites of WWII battle and concentration camp zones. While transitioning between countries, she found it difficult to reconcile that she had friends from opposing countries post-wartime. Her parent’s trip to Dachau further fragmented her sense of peace. The air-raid rubble and abandoned buildings that littered some streets haunted her as a child, a terror still raw when she thinks back. 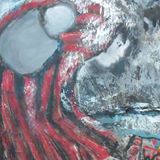 Recently, Hughes channeled that experience into her artwork, “Human Beings are Not Created for Target Practice.” The large canvas oil painting highlights military personnel . If stripped of their uniforms, would they have reason to shoot the enemy? Hughes bears no bias towards “good” and “bad” sides where nationalism incurs.

She is, however, partial to beautiful art. While living in Germany, Hughes remembers trekking down to monasteries and playing nearby. One day while climbing a wall enclosure surrounding St. Michaelsberg, she fell and hurt herself. Monks brought her in, and she was introduced to wondrous sculpture and paintings within. Inspired, she asked her parents to hire a governess educate her in classical art training and illumination found in religious texts.

Being a sensitive artist and a newcomer whenever her parents moved, she stood out from the crowd. Coming to the United States, she was sorely misunderstood for her European values and mannerisms. She was often bullied and put down, and over time, these experiences impacted her artwork.

She was a target again a few years back, after she returned from a trip to Florida to find her identity stolen. Her home, savings, and future fell through her hands. Hughes became homeless, living out of her car, where she slept and traveled for weeks in Woodstock. She refused to give up her dog when Social Services prompted her to do so, so she could receive a no-pets hotel room. Deprived of everything else, she wasn’t relinquishing her four-footed companion.

Hughes kept her spirits up and applied to housing assistance programs in the local area that would allow dogs. At the time, RUPCO was accepting applications for The Lace Mill for artists. She applied to the lottery  and the patterns of the universe aligned with her needs. “In the miracle of miracles, I got RUPCO housing. And I love it here—every day I thank my creator for this fabulous place and all the friends I have made.”

Hughes realizes that others don’t have it as good. At her last exhibition, held at The Lace Mill in October 2017, Hughes combined her activism with her art show, and made a stand for something larger than making money. She created 50 pieces for sale, where 75% of proceeds benefited local charities. One of her paintings benefited the Haitian People’s Project to provide meals for afflicted families. Consistently without food, Haitian parents often feed their children “mud cakes.” These look like pies, but made of mud, and eating them causes malnutrition and infection. Hughes wants to help in her way, through her art and social activism.

Hughes is proud to live in an apartment where she knows her efforts are supported. She’s made many connections to Kingston nonprofits and continues to support human rights in the way she knows best. Her influence has already been felt among the community; one man started to cry when he saw one of her paintings regarding domestic violence. “’This happened to me, and I’ve never told anybody,’” Hughes recalls. “It really touched him. He didn’t say whether it happened to him, his mother, wife or girlfriend, but it happened to him somehow.”

Her paintings possess an understated emotional impact. She doesn’t wish people to turn aghast, but she wants her visual to resonate with them. She wants people to know that there is awareness, that others have been through similar situations, and the often misunderstood pain — maybe portrayed as endless swirls or spirals in her abstract work — is normal and valid. She connects to her audience on a personal level. “I don’t like the word authentic, but I try to be sincere about who I am. I’ve been through things and I try to relate that to other people.”

Maybe malnutrition, abuse, or trauma has robbed a person of identity, and they use public facades to hide the pain. By recognizing themselves in her work, a part of them is resurrected and recognized. Maybe it will take years to fix, with in-between years of denial. But something clicked, and that is what activism is all about.

Hughes has changed her perspective on earning a living and being an artist. “I don’t need as much as I thought I needed to make me happy. I’m happy with or without. But the fact that I can paint whatever I want is an incredible blessing. And because I live here, I can do that.”