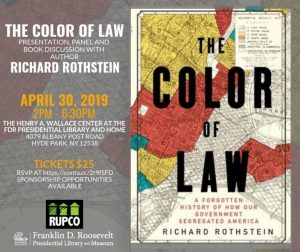 Join us in the Milstein Auditorium at the historic Franklin D. Roosevelt Library & Museum for a conversation addressing housing equity, wealth, segregation, and public policy.

Author Richard Rothstein shares his perspective from his research and book, The Color of Law: A Forgotten History of How Our Government Segregated America. A panel of national and regional thought leaders follows; a book-signing wine & cheese reception ends the evening.

Tickets cost $25, or $50 with an author-autographed book

Sponsorships are available now through March 31.

ABOUT THE AUTHOR: Richard Rothstein is a research associate of the Economic Policy Institute and a Fellow at the Thurgood Marshall Institute of the NAACP Legal Defense Fund. He lives in California, where is a Fellow of the Haas Institute at the University of California–Berkeley.

Racial segregation characterizes every metropolitan area in the U.S. and bears responsibility for our most serious social and economic problems – it corrupts our criminal justice system, exacerbates economic inequality, and produces large academic gaps between white and African American schoolchildren. We’ve taken no serious steps to desegregate neighborhoods, however, because we are hobbled by a national myth that residential segregation is de facto—the result of private discrimination or personal choices that do not violate constitutional rights. The Color of Law demonstrates, however, that residential segregation was created by racially explicit and unconstitutional government policy in the mid-twentieth century that openly subsidized whites-only suburbanization in which African Americans were prohibited from participating. Only after learning the history of this policy can we be prepared to undertake the national conversation necessary to remedy our unconstitutional racial landscape.

Richard Rothstein’s book, The Color of Law, published in 2017, is subtitled “A Forgotten History of How Our Government Segregated America.” In his book, Rothstein lays out the systemic discrimination embedded in the policies of our federal government, largely commencing with Franklin Delano Roosevelt’s New Deal programs that created de jure segregation. Chief among these New Deal measures was the creation of the Federal Housing Administration (FHA) in 1934, largely to insure bank mortgages. The FHA Underwriting Manual, first issued in 1935, contained a “whites only” requirement and the following language: “If a neighborhood is to retain stability it is necessary that properties shall continue to be occupied by the same social and racial classes.” In 1944, FDR created the Veteran’s Administration (VA) to serve the returning WWII veterans. The VA would provide many services including making mortgages to returning vets. The VA adopted the FHA Underwriting Manual. Officially codified in the federal government, racial discrimination in homeownership and public housing became the law of the land.

For many of us in the non-profit housing sector, the book was a revelation and a conundrum – how much of this forgotten history did we know? If we didn’t know it as well as we should, then surely our colleagues working in government, the private and non-profit sectors, didn’t either. Still today, the effects of these federal policies are widespread and endemic. The resulting disparity in homeownership rates was a key factor in wealth inequality that developed in America throughout the 20th Century. The median net worth of whites typically averages over ten times the net worth for Blacks or Hispanics and much of this inequality stems from federal discriminatory housing policy. According to the Pew Research Center, the variance was 13x greater in 2013 as the median net worth for Whites was $141,000 compared to Blacks at $11,000.