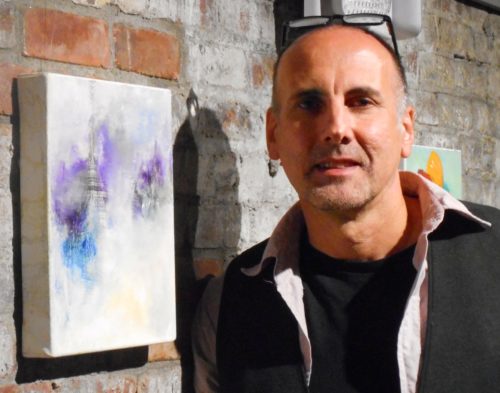 Before moving to The Lace Mill in February 2016, James Martin lived in a Bearsville Christian monastery. To pay his rent now, he makes a living as a teacher’s assistant, hall monitor, custodian, and substitute teacher at Onteora School.

This wasn’t the way he wanted to lead his life, though. If he had the choice, he’d swap a monastic life for an artistic one—and gain a following that afforded notoriety. For now, though, he works in his studio and shows his work in The Lace Mill’s galleries, offering a bit of himself to the world in preparation for when luck strikes.
Getting a Lace Mill apartment  wasn’t just a stroke of good luck for Martin. Back in 2014, a friend suggested he apply to The Lace Mill, 55 apartments preferenced for artists. On the first day of the application lottery, a snowstorm wracked Kingston. Despite the transportation threat, Martin arrived at the RUPCO office, application in hand, and was greeted by a secretary, incredulous of his arrival. “Wow, you’re the first to hand in the application—nobody’s come out in this weather,” she marveled. Perseverance, luck, Divine intervention — this mixture lent him an opportunity to acquire an apartment; during the second lottery wave, he got called. “To have a place like RUPCO is a blessing, no doubt about it,” Martin says.
The Lace Mill is a perfect for his artistic needs. An ongoing student in the arts, Martin finds it fitting to live in a cozy studio space where he creates. He studied at Hunter College and Brooklyn College, where he completed a double major in fine arts and film. Martin wrote and directed several low-budget films, which did particularly well in the 80’s, like “I Was a Teenage Zombie.” However, with all the hubbub of the theater district, something surfaced and shifted his videography flow.
He had a new calling. God asked he put down the camera to center his thoughts on religion; Martin listened. He pursued monastic life and spent several years in more meditative spaces. Curious to link religion and his art background, he dabbled in iconography, but was disappointed with the art form’s limitations. Martin says, “It’s an exact art, and there’s no room for individuality, and that’s not how I was trained.” After several years of full-time religious service, he moved out and started odd jobs around the area. 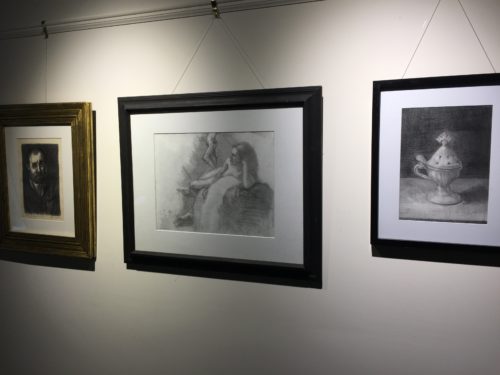 Now, at The Lace Mill, he longs to be a full-time artist like the larger-than-life masters, George Bellows and Edward Hopper. These men have style, a type of luring expression he wishes to produce in his own work. In Hopper’s paintings, buildings or objects that are part of the everyday environment, like the restaurant in “Nighthawk,” convey simple images but relay meaningful messages. Their works are like mini worlds to get lost in, like a story, and Martin’s videographer-self appreciates the artist’s flair for summoning The Divine.
Martin refers to commonplace pictures and wisdom for inspiration and direction. He learned from monastic life to take things day-by-day, to not plan every detail of the future. Life is constantly in flux, especially living on modest means. Even though he considers himself a “starving artist,” and relies on other jobs for sustenance, he knows he will get somewhere, someday. “I’ve always had confidence in what I do, but it wasn’t always easy to succeed.” Making a name in the arts world is a lifetime aspiration, and earning a living as a full time artist is the ultimate achievement. Livelihood based on profits from artistic projects alone is “going to be hard. There’s going to be times when that work isn’t there, but if I keep at it, it will all work out. Don’t ask me how, it’s a mystery.” He experiments in watercolor, pen-ink, and charcoal pencil. And in 2017, he found a calling for coordinating collaborative artist shows like “13 Misfits” and ArtWalk .
His studio space is the world that is safe to get lost in, his home a place where he creates that “wow” piece that art connoisseurs will fawn over. His artistic enlightenment, Godsent, will come to him here at The Lace Mill. He just has to listen to that still small voice.
Close